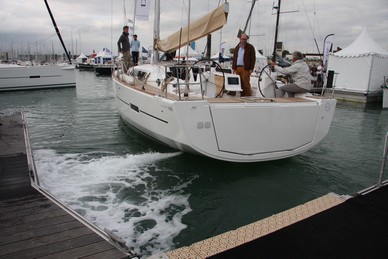 What Is a Thruster System?

Wind force or wind resistance is one of the most crucial elements considered while planning for a sail mission. The wind resistance comes into play when covering thousands of miles of oceanic distance. Moreover, it also imparts a significant influence on the ship’s maneuverability at the time of docking it at a coast or shipyard. As part of old techniques, tugs are generally used to compass the ship at lower speeds.

“Thruster’’ in a layman’s language is a technological replacement of tugs. It is an impeller or propeller which is enclosed in a duct. Water is allowed to passed through it to create a thrust. This thrust, in turn, eases the movement of ships even at low speed at the docks.

What Is a Stern Thruster?

A stern thruster is a type of maneuvering thruster. It is called a stern thruster because it is installed at the stern part (backward part) of the ship. It is a propeller-shaped thruster that can be electrically driven or hydraulic driven. Usually, an electric-driven stern thruster is preferred due to its durability in an operational capacity.

It is installed at the rear end of the ship in the tunnel. This tunnel is open at both ends of the ship. One end is used to suck the water, and the other is utilized in water discharge. Consequently, this whole process generates propulsion energy to maneuver the ship in the opposite direction.

It comes with pitch blades that are used with hydraulic oil whenever a change in the ship’s direction is required. You can change this pitch depending upon the requirement. You can make it zero if no thrust is required.

The stern thruster is placed above the waterline of the ship because it is at the backend of the ship, and it is used to discharge the water being taken in through the tunnel from the forward thruster.  The type of stern thruster to be erected in a ship depends upon the ship’s length, cargo capacity, and route.

What Are the Core Advantages of a Stern Thruster?

What Are the Disadvantages of a Stern Thruster?