From idea to reality through design, development and quality optimization. The company Holland Marine Parts from Dordrecht has completed this phase already. Director Henry Kroeze introduced the Jet Thruster in 2011. A maneuvering system for boating that works on water pressure and thereby provides a quiet, safe and reliable alternative to the bow and stern thruster. It became an international success. It is unlike entrepreneurs to lean back and relax, instead they listen to their customers. And, if necessary, adapt a design to meet the demands of the market. And that is exactly what Henry Kroeze and his team have done with the introduction of the Jet Thruster Compact.

The success of the Jet Thruster manifests itself mainly in the larger middle class and large recreational crafts. As installation set for existing boats (retrofit) and as a factory option (OEM) from manufacturers such as Mastercraft and Dufour. Widespread satisfaction among users, the shipyards that have installed the system and among the aforementioned manufacturers. However…

The demand from the market was to make the system smaller, in particular the pump that soaks up the water underneath the boat. Making it easy to install in the small and the smaller middle segment of recreational crafts. It meant designing a new, compact pump. Investment, engineering, building, testing, adjusting, and testing once more. Manufacturer Holland Marine Parts has succeeded. The result is a system which is just as reliable as the existing system and also taps into a new market of smaller boats in which installation of a bow or stern thruster is not an option. In addition, the two-year development phase has been beneficial for the whole range of products that Holland Marine Parts supplies. How this works, we explain on the basis of a piece of history, explanation of the operation and explanation of the further development of the Jet Thruster Compact.

In the beginning of 2010, owner Henry Kroeze of Holland Marine Parts in Dordrecht took over the concept of the forerunner of the current Jet Thruster. He was convinced the idea was sound, but was not sure of the quality and reliability at the time. Together with his engineering team, he began a process of testing, development, improvement and optimisation. The system went into production in early 2011. Henry Kroeze at that time: “Our Jet Thruster system is 100% reliable thanks to the use of high-quality materials.” The experiences of the last six years confirm his assertion. Initially the system could only be operated with a joystick on a console. Later, remote control was also added, which made it possible to maneuver even from the docks. Meanwhile, marketing manager Pieter Cats handled complete documentation, a current website, an extensive dealer network at home and abroad and publicity in the world of boating.

The Jet Thruster is a manoeuvring system based on water pressure. An electric pump suctions water underneath the boat with large volume through hoses or pipes and a specially developed 3-way valve, and is forced into small outflow openings. Starboard or port is a simple matter of electric operation of this 3-way valve with a joystick and/or remote control. The powerful jet of water creates the same effect as a bow thruster, the thrust amounts to between 30 to 90 Kgf, depending on the system chosen. The product range of the systems is in accordance with the power from JT 30, 50, 70 and 90. As bow-jet or a combination of bow and stern jet. Application for sailing and motor yachts of steel, aluminium, polyester and wood. Benefits of the system include virtually no resistance because of the aesthetically pleasing small outflow openings, flexible installation options and quiet operation due to the absence of cavitation. Maneuvering has become significantly more simplistic for the user of the system. The boat can easily be positioned perfectly. Moreover, the chance of damage is minimised and the Jet Thruster plays its part in safety on board and around the boat thanks to the absence of protruding and rotating parts.

For the JT 70 and JT 90, used for larger vessels, the installation of the pump is usually not a problem. There is always a spot to find where the pump can be positioned. For the lighter JT 30 and JT 50, often used in smaller boats, the size of the pump sometimes causes lack of capacity. This is the reason that the Jet Thruster Compact was developed and replaces the JT 30 and JT 50 from now on. The installation height is reduced from 28 to 17 centimetres. In addition, the pump can be installed in all imaginable positions; even vertically. Weight savings are achieved by producing the housing of composite, instead of using stainless steel. The same is true of the newly designed modular pump base. The impeller which builds up the pressure, is made of stainless steel instead of composite in the compact version. All in all, the pump of the Jet Thruster Compact is no fewer than ten kilos lighter than its predecessors. The development has also led to a profitability improvement of 10% compared to the previous models. As a result, the Jet Thruster Compact is even more suitable for boats, ski boats and motor and sailing yachts of a smaller size of seven to twelve metres. The total range is increased from 20 to 50 feet.

Influence on the whole range

Although the Jet Thruster system has proven to be extremely reliable, the development of the Jet Thruster Compact led to an optimisation of the entire production range. Every set, including the JT 70 and 90, are now equipped with a PLC; a TÜV-approved electronic control system for even more precision. Additionally, connection material of the renowned brand Deutsch is now being used.

A mere good idea, such as the forerunner of the Jet Thruster, is not enough. Holland Marine Parts has turned it into a reliable system thanks to a new set-design that over a thousand users are enjoying already. The trick is to not become idle, but to continue to listen to the sounds coming from the market. And then not be afraid to meet those sounds on the basis of a completely new design. With the Jet Thruster Compact, Holland Marine Parts reaches a new market segment in smaller recreational crafts and manages to increase the level of quality of the entire product range at the same time. A new design that has led to a win-win situation and a widening of the market.

The improvements of the new Jet Thruster: 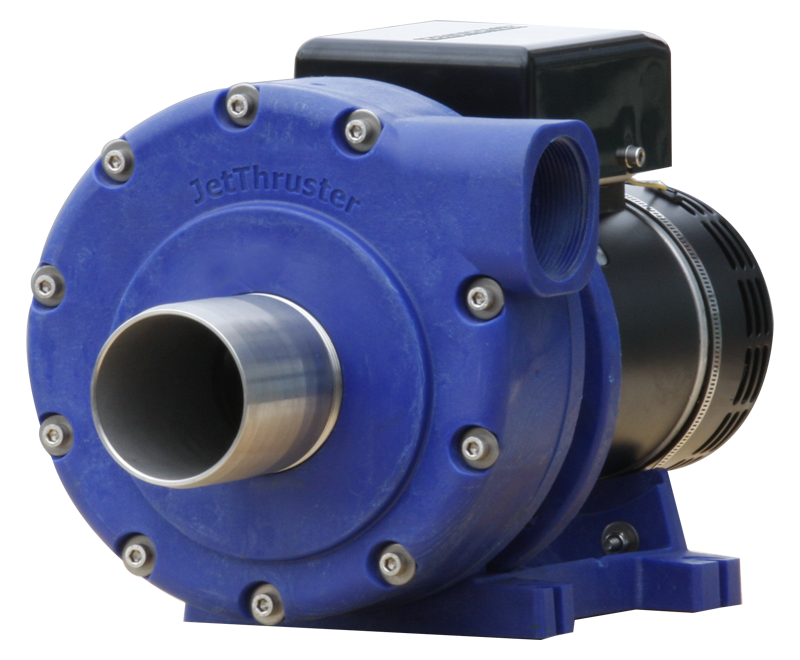 All our products are manufactured according to CE regulations. We keep the rights to change descriptions, graphs or statements, which are required for technical development of our Jet Thruster systems.